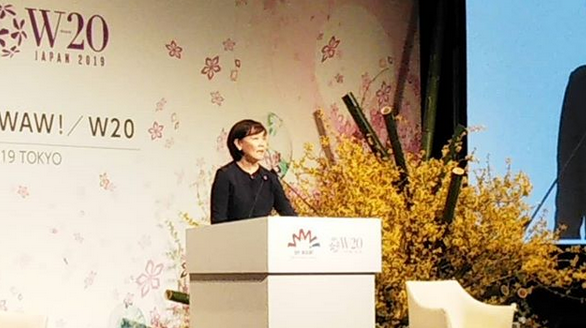 Paola Subacchi, founding director of Essential Economics, and research assistant Holly Lewis-Frayne call on the W20 to closely monitor attainment of the 25 by 25 commitment to continue the promotion of diversity

Gender inequality is an unfortunate and persistent fact in all countries – including the G20 states. This inequality extends much further than the domestic household domain; it taints the distribution of resources such as education, legal arrangements and the labour market. The exclusion of many women from the formal economy has a negative impact on productivity growth and overall economic activity.

This information is not new. Indeed, it is something that many have long been aware of. Yet until fairly recently the gender gap was considered to be a marginal issue for economic governance and one best dealt with at the national level. When the Women 20 was founded in 2015, it marked a turning point: it brought the issue of inclusion to the forefront of the dialogue and solidified a shift from gender-neutral to gender-responsive international economic governance.

The W20 is an official G20 engagement group, made up of a transnational network of women’s organisations, entrepreneurs, academics, think tanks and members of civil society. It was founded on the grounds that progress towards gender equality had been too slow and too peripheral and that domestic policies needed to be coordinated into an international strategy for any visible improvements to occur.

The W20 aims to promote women’s economic empowerment as an essential part of the G20 process. As such, it must make concrete policy recommendations that have a measurable impact and provide feedback on the G20’s previous actions.

The general policy focus of the W20 has been on empowering women by assessing access to education and skills, representation within leadership roles (especially those within the G20 process), and on implementing quotas to help close the gap. More specifically, it also aims to achieve its goal by focusing on women entrepreneurs and providing more comprehensive measurements of economic activity. The former entails the removal of discriminatory barriers, tax incentives and access to credit; and the latter entails including the contribution of unpaid domestic and care work in gross domestic product.

The success of G20 engagement groups is typically assessed against a variety of criteria. They include whether the group is perceived as legitimate; the access that it has to G20 officials and ministers, especially those in the finance track; the influence that it has over G20 agreements; and the quality and use of its outputs, such as reports and scorecards that rate G20 commitments against their intended targets.

To some extent the W20 has been a success, as it has earned itself a credible status and extended the agenda of the G20 to include gender equality. Gender-responsive governance is now a feature of international economics; the gender gap and women’s economic empowerment have been prominent features at the annual World Economic Forum meeting in Davos and the spring and annual meetings of the International Monetary Fund and the World Bank in recent years.

The W20’s biggest achievements build on the G20’s 25 by 25 commitment made at the 2014 Brisbane Summit, according to which each G20 member aims to increase the participation of women in the formal labour market by 25% by 2025, and the Women Entrepreneurs Finance Initiative (We-Fi), a World Bank Group partnership that was established at the 2017 Hamburg Summit with the purpose of providing billions of dollars to women-led small and medium-sized enterprises in developing countries.

It is these successes, however, that highlight exactly where the W20 has not fared so well. Visibility has been gained and commitments have been made – but this is yet to be translated into strong and influential policy action. Indeed, the 25 by 25 commitment stands alone as the only measurable target and here limited progress has actually been made. As for the We-Fi, it lacks a shared roadmap and has not even received the commitment of all G20 members.

The W20 is constrained by several factors, such as limited financial backing and resources, and a constrained organisational structure that lacks a permanent secretariat. Consequently, the W20 has not been able to produce research at the cutting edge of the policy dialogue. In addition, despite having run through five G20 chairs – Turkey, China, Germany, Argentina and Japan – many W20 delegates are still unfamiliar with the G20 process and hence find it difficult to relate to the G20 agenda.

In order to push further towards its goals, the W20 needs to monitor the 25 by 25 and We-Fi outcomes over the coming years and hold G20 members accountable. This can be done by promoting discussion, collecting comparable figures and issuing evaluative annual reports. Unless there are more structural and monitored policy reforms at the G20 level, the issue of women’s economic empowerment will ultimately remain a peripheral issue.