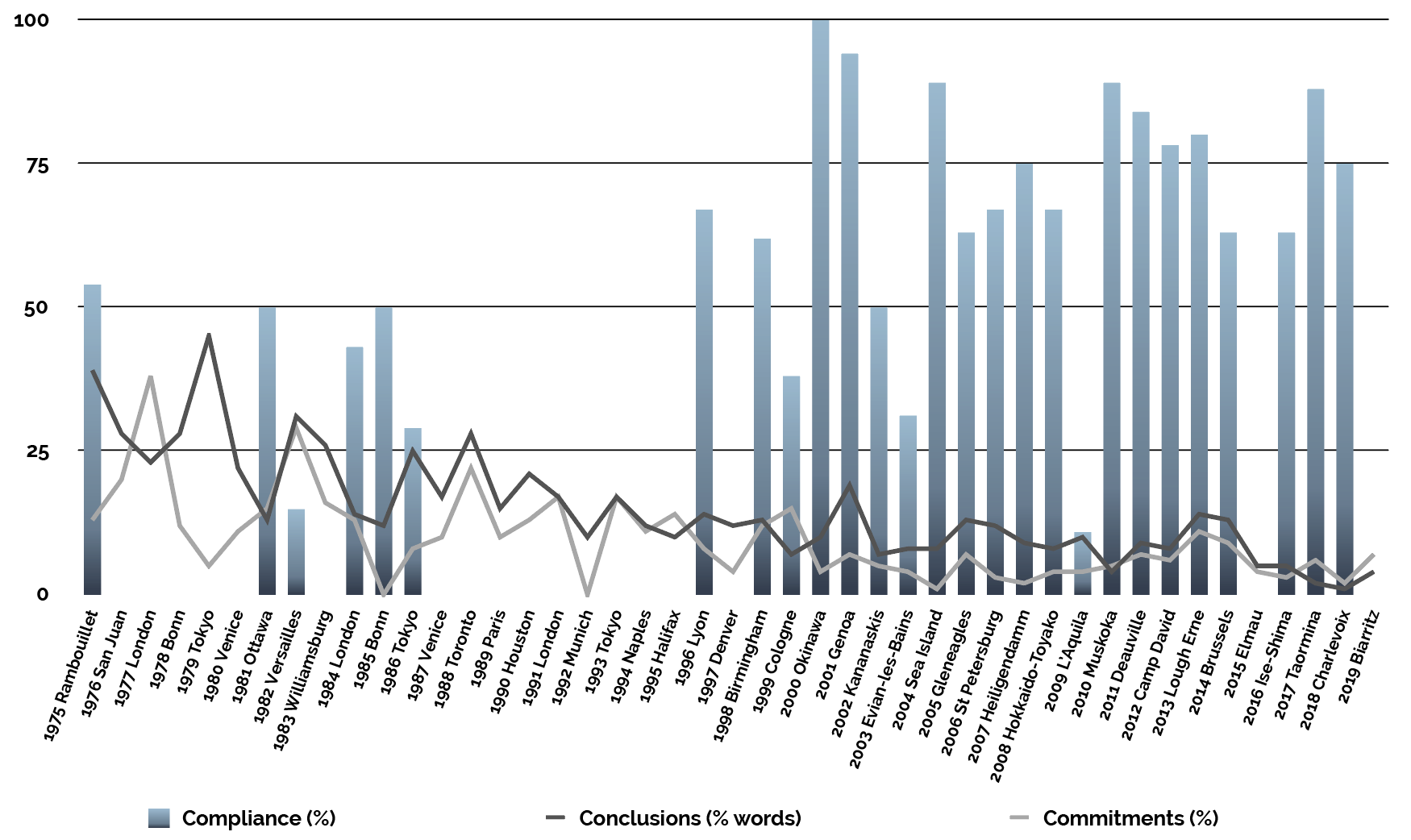 In times of crises, G7 summits can serve as an important forum for global coordination and cooperation. The current COVID-19 crisis has already sparked rising protectionism as well as frictions in US-China relations. Ensuring safety and securing sufficient essential medical and other supplies for their citizens have become overarching priorities for G7 leaders and others. The rapid slowdown in global economic growth and trade will result in re-evaluation. Keeping trade channels open and slowly restoring trade levels will be essential for the global recovery.

The G7 has historically been a strong proponent of free, open and fair trade and the multilateral trading system, with the World Trade Organization at its core. Since the first G7 summit in 1975, trade has been among the top three subjects addressed each year. From 1975 to 2019, on average 15% of the words in each G7 communiqué was on trade. The summits from 2003 to 2007 each issued a stand-alone document on trade. However, after the peak of 45% in 1979, the percentage of words declined to the lowest in G7 history in 2018, at 1%, and in 2017 to 2%. That decline began in the early 1990s, when the Uruguay Round resulted in the creation of the WTO. Since 2000, the percentage of words devoted to trade decreased steadily as the WTO Doha Round failed. Trade-related issues addressed by the G7 included rejecting protectionism, urging members to conclude trade rounds, encouraging trade liberalisation and boosting trade for development. New topics, such as trade in environmental goods, trade and gender, and e-commerce, recently emerged.

From 1975 to 2019, G7 leaders made 343 public, collective, precise and politically binding commitments on trade. They account for 6% of all commitments produced during those years.

The highest number of trade commitments was 24 in 2013. The second highest of 21 was in 1977, when the percentage of trade commitments peaked at 38%. No commitments on trade were made in 1985 or 1992. The period between 2013 and 2017 produced commitments in double digits, spurring great strides in trade liberalisation. The number fell to five in 2018 and 2019 as the United States began opposing any anti-protectionist promises in the communiqués.

The G7 Research Group has assessed 42 trade commitments for compliance by G7 members, finding an average of 65%. This is well below the 76% average across all subjects. Two commitments made at the 2000 summit – on launching a new round of WTO negotiations – achieved perfect compliance. There was 94% compliance with the 2001 commitment to conclude the WTO’s Doha Round. Since 2004, compliance has been consistently above 63%, except for 2009.

The lowest compliance came with commitments made in 1983 on resolving current trade issues, at 0%, and in 2009 on refraining from protectionism, at 11%.

Compliance has been led by the European Union at 85%, followed by Canada at 75% and the United Kingdom at 73%. The lowest compliance has come from France, at 47%.

To improve compliance with their trade commitments, G7 leaders could use several proven, low-cost accountability measures under their direct control.

Second, holding a trade ministerial meeting, although useful, does not lead to higher compliance with trade commitments. Between 1982 and 1999, the trade ministers of the United States, European Union, Canada and Japan, known as the Quad, met annually before each G7 summit. Average trade compliance for those years was 38%, lower than the 69% average for years where there were no such meetings.

Third, G7 leaders should refer to the relevant core international institution – the WTO, although lately there have been calls for its reform. Commitments that mentioned the WTO averaged 79% compliance, compared with 58% for those that did not.

Fourth, leaders should include a one-year timeline in their trade commitments. This increases compliance by 13%, while having a multi-year timetable decreases it.

In light of the COVID-19 pandemic, in addition to the above, G7 leaders should commit to keeping supply chains open, removing all trade restrictions on medical and essential supplies, and utilising trade to save lives and support economic growth.