The G7 made 415 collective, precise, future-oriented, politically binding commitments on health as identified by the G7 Research Group, averaging nine commitments per summit. Health ranked third highest among the 32 subjects on which the G7 leaders made commitments. The first health commitment was made in 1979, with a steady increase from 1996 onwards. From 2000 to 2008, the G7 showed consistent and sustained attention on health, but this focus declined from 2009 to 2012. Focus increased again in 2014 with 12 health commitments, rising to 61 in 2015 and peaking at 86 at the Ise-Shima Summit in 2016. This decreased to seven health commitments in 2017 and fell again to only four at Biarritz in 2019.

The G7 Research Group has assessed 70 health commitments for compliance by G7 members. Average compliance was 70%, lower than the average of 76% with all assessed commitments across all subjects.

Compliance after 2015 was inconsistent, starting with a high of 86% for 2015, 75% for 2016 and 25% for 2017 – the lowest score in the past five years. Compliance soared once again for 2018, reaching 75%. The interim compliance report for the 2019 summit, covering implementation up to 10 December 2019, showed reduced compliance of 50% across the three priority health commitments assessed.

From the start, Canada had the highest compliance with 92%, followed by the United States and the United Kingdom with 88% and 85%, respectively. Italy had the lowest compliance, with 58%. 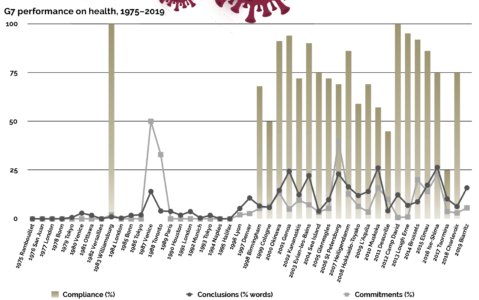 At their next summit, G7 leaders should make more health commitments that specifically reaffirm support for other international organisations, notably the World Health Organization. The G7 Research Group assessed compliance with six commitments that specifically note the WHO and found average compliance of 87%, much higher than the 70% health average.

The G7 should also make binding commitments on global health systems, such as development finance for emergency responses, especially for fighting pandemics, universal health coverage, and primary and emergency healthcare.