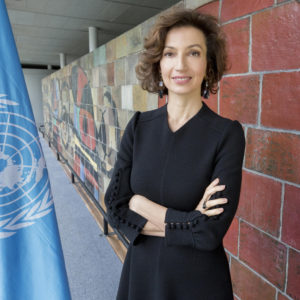 Audrey Azoulay was elected director-general of UNESCO on 15 November 2017 for a four-year term. A graduate of France’s École Nationale d’Administration and of the Paris Institut d’Études Politiques, she has worked in the culture sector since the start of her professional career, focusing on the funding of French public broadcasting and on reforming and modernising France’s film support system. She has also served the European Commission, providing her expertise on issues concerning culture and communication.

Shaping the future with multilateralism

The culture and education sectors were thrown into disarray by the pandemic....

Multilateralism after COVID-19: a necessity, not a choice

The current global crisis must not be a temptation to turn inwards;...

Her education, our future

The education of girls and women is one of the most powerful...

Education is the challenge of the century. Without education, there will be...

From digital skills to digital citizenship: the stakes of 21st-century education

All societies are undergoing rapid, exponential change, in large part due to...